'Our ties to Jerusalem can never be unraveled,' Nir Barkat says in video about his plan to provide easy access to tourists sites by cable car, noting that the cable car will serve not just economic and tourism needs, but also ideological goals. 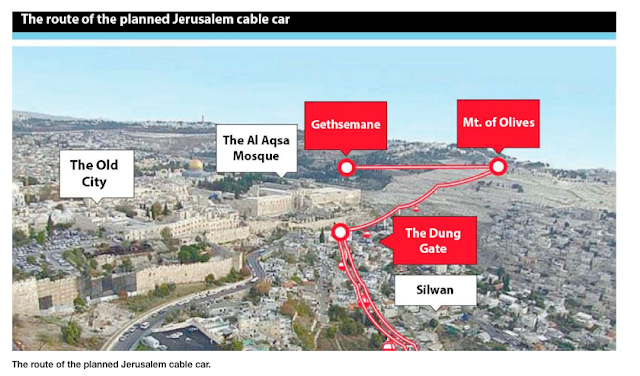 Jerusalem’s planned cable car will include a stop in the Palestinian neighborhood of Silwan, so that riders will “understand who really owns this city,” Jerusalem Mayor Nir Barkat told Likud party activists recently.

According to the municipality’s published plans, the cable car will have four main stops: the First Station complex in southern Jerusalem; the Kedem Center, which belongs to the right-wing organization Elad, near Silwan; the 7 Arches Hotel on the Mount of Olives; and the churches of Gethsemane, near the Old City’s Lions Gate.

But Barkat mentioned a fifth stop – the Siloam Pool, deep in the heart of Silwan and some 500 meters from the Kedem Center – in a video clip published on his Facebook page last week. In the video, the mayor addresses a group of Likud activists he is conducting on a tour of Jerusalem.

Both stops, the Siloam Pool and the Kedem Center, would be inside the City of David national park, which is run by Elad. Barkat said the Kedem stop will be the most important, as cars will depart from there in three directions – to Gethsemane, the Mount of Olives and Siloam.

He also said that the cable car will serve not just economic and tourism needs, but also ideological goals.

After describing the archaeological effort needed to expose the steps leading from Siloam to the Temple Mount and his plan to repair the pool, he added, “I want to enable Jews and non-Jews to recreate this experience. Anyone who wants to immerse [in Siloam] and then go up toward the Temple Mount experience, anyone who does this will know exactly who the owner of this city is.
“When they have this experience, even leftists get totally confused, because they understand that this is real, and our ties to Jerusalem can never be unraveled. For this experience, it’s also necessary to create a means of transportation.”

Barkat said he wants “to bring 10 million tourists who will all get to these places. Without the infrastructure of trains, cable cars and so forth, we won’t be able to experience this unique experience. To bring the wider world, to understand who really owns this city – all this infrastructure is intended for that.”
Posted by Rebecca at 9:38 AM 1 comment:

Panoramic view of the plaza of the Dome of the Rock


Click on the photo to go to Facebook and see the panorama. This is from the Palestinian photographer Fadi Amirah, who takes beautiful photos of Jerusalem and other parts of Palestine.
Posted by Rebecca at 9:33 AM 1 comment:

Email ThisBlogThis!Share to TwitterShare to FacebookShare to Pinterest
Newer Posts Older Posts Home
Subscribe to: Posts (Atom)
This blog is a place to collect information about Jerusalem, especially current events, but also historical articles. It will also be a resource for a course that I teach, called "Jerusalem: City of Faith, City of Struggle."
The course also has a Wiki, available at Jerusalem Seminar.
Wiki Links
Temple Mount - articles
Contemporary Jerusalem - newspaper articles.